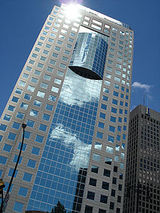 Description:
201 Portage (former names TD Centre, Canwest Place and CanWest Global Place) is an office tower at the intersection of Portage and Main in Winnipeg, Manitoba, Canada. It was built in 1990 by the Toronto Dominion Bank, and was later acquired by Canwest to serve as the company's main corporate headquarters. The thirty-three storey, 47,000 square metre (502,000 square-foot) building stands one hundred twenty-eight metres tall (420 ft), making it the tallest building in Winnipeg (3.9 metres taller than the Richardson Building, across the street). It is connected to Winnipeg Square which is the underground concourse. A smaller twin building was planned for the TD but never built. Global Winnipeg (CKND-TV) moved its operations to 201 Portage on September 1, 2008. It is the tallest building between Mississauga and Calgary.

Having declared bankruptcy and sold its media properties, Canwest has vacated the premises; its main successor Shaw Media will retain only the lease for the 30th floor, where the Global Winnipeg studios are located. On 11 January 2011, the Canwest logo and sign was removed. Currently, the building is branded simply as "201 Portage" until a new tenant is found for the former Canwest offices. The building is still managed by Creswin Properties, a real-estate company privately owned by the Asper family that owned Canwest.