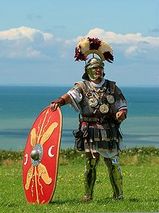 Description:
A centurion (; ), also hekatontarch (ἑκατόνταρχος) in Greek sources, or, in Byzantine times, kentarch (κένταρχος) was a professional officer of the Roman army after the Marian reforms of 107 BC. Most centurions commanded 83 men despite the commonly assumed 100, but senior centurions commanded cohort, or took senior staff roles in their legion.

Centuries, or Centuriae, means tribe or company. Theoretically, this word traces its roots to centum which is Latin for one-hundred,

In the Roman infantry, centurions initially commanded a centuria or "century". Centuries, or centuriae, developed from the Roman tribal system under the Servian reforms and could contain 200 to 1000 men. This became 100, at full strength, under the Marian reforms. Later, generals and Caesars further manipulated these numbers with double and half-strength units. Gaius Julius Caesar, for instance, made the first century double strength.

During the Imperial era, centurions gradually rose in seniority in their cohort, commanding centuries with higher...
Read More