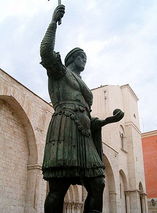 Description:
The Colossus of Barletta is a large bronze statue of an Eastern Roman Emperor, nearly three times life size (5.11 meters, or about 16 feet 7 inches) and currently located in Barletta, Italy.

The statue reportedly washed up on a shore, after a Venetia ship sank returning from the sack of Constantinople in the Fourth Crusade in 1204. The identity of the Emperor is uncertain. According to tradition, it depicts Heraclius (reign 610-641 AD); though this is most unlikely on historical and art-historical grounds. More likely subjects are Theodosius II (reign 408-450 AD), who may have had it erected in Ravenna in 439, Honorius (reign 393-423 AD), Valentinian I (r. 364-375), Marcian (r.450-457) or Justinian I (r.527-565).

It is known that a colossal statue was discovered in 1231-1232 during excavations commissioned by Emperor Frederick II in Ravenna, and is probable that he had it transported to his southern Italian lands. The first certain news about the statue date however from 1309, when parts of its legs and arms were used by local Dominicans to cast bells. The missing parts were remade in the 15th century.

The statue evidently depicts an emperor, identifiable from his imperial diadem and his commanding gesture that invokes the act of delivering a speech, with his right arm raised, holding a cross. The Emperor wears a cuirass over his short tunic. His cloak is draped over his left arm in a portrait convention that goes back to Augustus. In his outstretched left hand he now holds an...
Read More