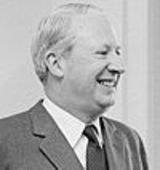 Description:
The Conservative Party leadership election of July 1965 was held to find a successor to Sir Alec Douglas-Home.

It was the first time that a formal election by the parliamentary party had taken place, previous leaders having emerged through a consultation process. This procedure had fallen into disrepute following the manoeuverings over the leadership at the 1963 party conference which had led to the appointment of Douglas-Home, then a hereditary member of the House of Lords.

There were three candidates for the party leadership - Edward Heath, then Shadow Chancellor; Reginald Maudling, Shadow Foreign Secretary; and Enoch Powell, Shadow Transport Minister. Maudling, the most experienced and publicly known of the candidates, was generally considered to be the favourite. Heath, however, fought a more effective leadership campaign, organised by his young lieutenant Peter Walker.

The result of the ballot on 27 July was as follows.

The rules in place required the victor to have both an absolute majority (which Heath had narrowly achieved) and, in the first ballot, at least a 15% lead of votes actually cast (not counting abstaining members - this would be changed in time for the 1990 contest). As Heath had not achieved the latter hurdle, the election could therefore have gone to further rounds. However Maudling conceded defeat and Heath was duly declared leader.

Powell had not expected to win, but said he had "left his calling card", ie. publicly demonstrated himself to be a...
Read More