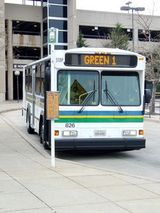 Description:
CUE Bus (City-University-Energysaver) is a bus service operated by the city of Fairfax, Virginia, and is completely separate from the Fairfax Connector bus service run by Fairfax County.

CUE operates two loop routes between George Mason University and the Vienna/Fairfax-GMU Metro station, each running in both directions for a total of four named routes. The Green loop, consisting of routes Green 1 (clockwise) and Green 2 (counterclockwise) operates on the east side of Fairfax City, while the Gold loop, consisting of routes Gold 1 (clockwise) and Gold 2 (counter) operates on the west side.

In addition to providing service to GMU and Vienna Metro, the CUE serves all major activity centers in the City of Fairfax, including downtown, Kamp Washington, Northfax, Fairfax Circle and Fair City Mall.

In 2009, Fairfax City partnered with Montgomery County, Maryland, in the purchase of new buses. As a result, six 35-foot, low-floor Gillig Hybrid buses were added to the fleet in August 2009. These new buses are expected to consume much less fuel, as they operate off an electric engine when operated at 35 MPH or lower, and 35 MPH is the maximum speed limit in Fairfax City. The CUE Bus system owns and operates eight additional 30-foot Gillig Phantom buses in its fleet.