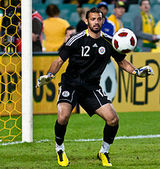 Diego is the brother of fellow Paraguayan footballer, Édgar Barreto.

Barreto started his career with the club Cerro Porteño, where he was trained by Modesto Sandoval and was teammates with Aldo Bobadilla. He developed in the youth divisions of Cerro.

Barreto was part of the gold medal-winning Paraguayan football team in the 2004 Olympics. Paraguay booked a quarter-final place with two victories in the qualifying group. The squad finished first, and then beat South Korea in the quarter-finals and Iraq in the semi-finals, before winning to Argentina in the final.

In 2007, Barreto had a spell with Newell's Old Boys in Argentina, but failed to break into the first team, returning to Paraguay in January 2008. However, he signed again for the Paraguayan team in July 2008.

In 2008 he spent a month with FC Locarno. He played in only one match, allowing 4 goals in the derby against FC Lugano. Barreto has since returned to Cerro Porteño.

Diego is known for his quick reflexes and for commanding the defense. That makes him one of the best Paraguayan goalkeepers.