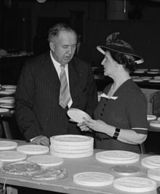 Description:
Edward Bruce (April 13, 1879 – January 26, 1943) was the director of the Public Works of Art Project (PWAP) and the Section of Painting and Sculpture, two New Deal relief efforts that provided work for artists in the United States during the Great Depression. Bruce had been a successful lawyer and entrepreneur before giving up his career altogether at the age of forty-three to become an artist. However, like most artists during the Depression, he found it impossible to make a living making art, and grudgingly returned to business in 1932 as a lobbyist in Washington for the Calamba Sugar Estate of San Francisco. In 1933, President Franklin D. Roosevelt received a letter from the American painter George Biddle, who suggested a New Deal program that would hire artists to paint murals in federal office buildings. Roosevelt was intrigued by the idea, and brought the idea to the Treasury Department, which oversaw all construction of federal buildings. Bruce had by that time made some connections in Washington, and he was asked to help organize the effort.

He was born in Dover Plains, New York, on April 13, 1879, the son of a Baptist minister; he began painting at the age of 14. He graduated from Columbia Law School in 1904 with high honors. He began practicing law in New York and Manila, Philippines with a prestigious firm, Bruce, Lawrence, Ross and Black. While working in Manila, he bought the Manila Times, a popular daily newspaper. In 1915 changed his focus to...
Read More