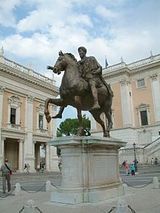 Description:
The Equestrian Statue of Marcus Aurelius is an ancient Roman statue in the Campidoglio, Rome, Italy. It is made of bronze and stands 3.5&nbsp;m tall. Although the emperor is mounted, it exhibits many similarities to standing statues of Augustus. The original is on display in the Palazzo Nuovo, with the one now standing in the open air of the Piazza del Campidoglio being a replica made in 1981 when the original was taken down for restoration in the Palazzo.

The overall theme is one of power and divine grandeur — the emperor is over life-size and is holding out his hand in a gesture much like that in the Augustus' portraits. In this case the gesture may also signify clemency as some historians assert that a fallen enemy may have been sculpted begging for mercy under the horse's raised hoof (based on accounts from medieval times which suggest that a small figure of a bound barbarian chieftain once crouched underneath the horse's front right leg). Such an image was meant to portray the Emperor as victorious and all-conquering. However, shown without weapons or armor, Marcus Aurelius seems to be a bringer of peace rather than a military hero, for this is how he saw himself and his reign.

He is riding without the use of stirrups as the stirrup had not yet been introduced to the West.

The statue was erected in 176 AD. Its original location is debated: the Roman Forum and Piazza Colonna (where the Column of Marcus Aurelius stands) have been...
Read More