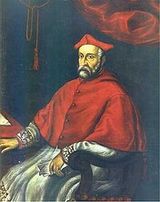 Born in Mantua, he was the son of the Marquess Francesco Gonzaga, and nephew of Cardinal Sigismondo Gonzaga. He studied philosophy at Bologna under Pomponazzi, and later took up theology.

In 1520, or as some say, 1525, Sigismondo renounced in his favour the See of Mantua; in 1527 his mother Isabella brought him back from Rome the insignia of the cardinalate.

Notwithstanding his youth, he showed great zeal for church reform, especially in his own diocese; and in this he received help and encouragement from his friend Cardinal Giberti, Bishop of Verona. His mode of life was stainless and a manuscript work of his, Vitae Christianae institutio, bears witness to his piety. He published a Latin catechism for the use of the priests of his diocese and built the diocesan seminary, thus carrying out reforms urged by the Council of Trent, as his friends Contarini, Gilberti, Caraffa, and other bishops had done or were doing, even before the council had assembled.

His charity was unbounded, and many young men of talent and genius had their university expenses paid by him. The popes employed him on many embassies, e.g. to the Emperor Charles V in 1530. Because of his prudence and his business-like methods, he was a favourite with the popes, with Charles V, and Ferdinand I of Spain, and with Francis I of France and Henry II of France.