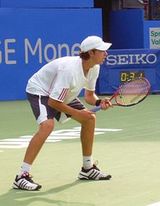 Description:
Ernests Gulbis (pronounced , born August 30, 1988) is a Latvian professional tennis player. In 2008, Gulbis won his first ATP Tour doubles title at the U.S. Men's Clay Court Championships, teaming with Rainer Schüttler, and in 2010 won his first ATP Tour singles title in the Delray Beach, defeating Ivo Karlović in the final. He won his second in July, 2011, by defeating Mardy Fish in the final of the 2011 Farmers Classic tournament, held in Los Angeles. His career highlights also include a 4th round appearance at the 2007 US Open and a quarterfinal appearance at the 2008 French Open, as well as several other ATP World Tour semifinal appearances.

Gulbis' professional training in tennis began at the age of 12, when he was enrolled at the Niki Pilić Tennis Academy in Croatia. Beginning after Wimbledon 2011, Gulbis is being coached by Guillermo Cañas. Previously, he was coached by Hernán Gumy (who before that was Marat Safin's coach), but their partnership ended due to Gumy's schedule; during that time, Darren Cahill served as Gulbis' consultant for several tournaments. Before Gumy, Ernests was coached by Karl Heinz Wetter and subsequently Nikola Pilić, the former professional Croatian tennis player and Croatian and German Davis Cup captain.