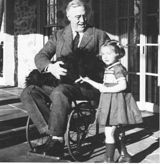 Description:
Franklin D. Roosevelt's paralytic illness began in 1921 at age 39, when Roosevelt got a fever after exercising heavily at a vacation in Canada. While his illness was well known during his terms as President of the United States, how debilitated he was due to his illness was kept from public view. After his death, his illness and paralysis became a major part of his image. He was diagnosed with poliomyelitis two weeks after he fell ill. However, a 2003 retrospective study favored a diagnosis of Guillain-Barré syndrome.

Timeline and history of illness