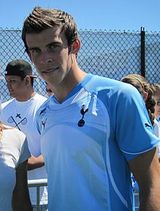 Description:
Gareth Frank Bale (born 16 July 1989) is a Welsh footballer who plays for Premier League club Tottenham Hotspur and the Wales national team. Bale began his professional career with then Championship side Southampton in 2005 and was transferred to Tottenham two years later.

Bale was born in Cardiff to parents Frank, a school caretaker, and Debbie, an operations manager; he attended Eglwys Newydd Primary School at Whitchurch. He is the nephew of former Cardiff City footballer Chris Pike. It was while at this school he first came to the attention of Southampton at nine years old, when he was playing in a six-a-side tournament with his first club, Cardiff Civil Service Football Club. Growing up his football hero was fellow Welshman and Manchester United legend Ryan Giggs.

Bale then attended Whitchurch High School in Cardiff. This is where, as well as football, he played rugby and hockey and was a distance runner. As a 14 year old he ran the 100 metre sprint in 11.4 seconds. Because of his superior skills, the school's PE teacher, Gwyn Morris, had to write special rules. These restricted Bale to playing one-touch football and not using his left foot. Whilst at Whitchurch, Bale trained at Southampton's satellite academy in Bath,...
Read More