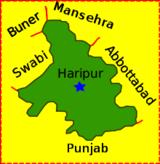 Description:
Haripur (Urdu: ہری پور) is a district in the Hazara region of the NWFP (sometimes referred to as Khyber-Pukhtunkhwa) province of Pakistan with an altitude of around above sea level. Haripur District has the highest Human Development Index of all the districts in the Hazara.

The Haripur district is situated at the heart of the ancient Gandhara civilization. At the time of Alexander the region including Taxila was known as "Eastern Gandhara", with its boundaries reaching as far as Kashmir. Geographically it lies on either side of the Sindu River,(Indus the River Goddess of Rigveda), near the Tarbela Reservoir. Most historians believe that the Aryans must have composed a number of Vedic hymns on the banks of Indus. During the kingship of his father Bindusara, the Maharaja Ashoka ruled this region as governor and, according to Tibetan Buddhist traditional stories,he is died here.

Chinese pilgrim Hieun Tsang crossed Haripur in 632 AD on his way to Kashmir via Kabul and Purshapura (Peshawar to be followed by Ou Kong in the middle of the 8th century who described the route as a road that starts from the western gate'of Kashmir and goes to Kien-to-lo, the then Chinese name for Gandhara. According to the Rajatarangini, when the expeditionary force of Raja Shankar Verman (832&ndash;902) sent against King Alkhana of the Gurjara Kingdom was on the way back to Sirinagar, it was attacked by the inhabitants of Hazara. The...
Read More