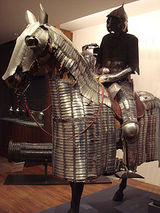 Description:
Heavy cavalry is a class of cavalry whose primary role was to engage in direct combat with enemy forces (shock troops). Although their equipment differed greatly depending on the region and historical period, they were generally mounted on large powerful horses, and were often equipped with some form of scale, plated, chainmail or lamellar armor as well as either swords, maces, lances, or battle axes.

Although some form of cavalry had been in use in Mesopotamia since 3000 BC, the chariot was the predominant mobile striking force in most armies in the region. By 600 BC armoured cavalry began seeing use, though it was not until the later ancient Greek era that true heavy cavalry emerged. Assyrian cavalry during the reign of Ashurbanipal was known to have used metal helmet and breastplate, fought with thrusting spears in conjunction with bows and arrows, and rode on horses covered with textille barding, however it's unclear how this early heavy cavalry operated and performed.

Iranian tribes such as the Massagetae were believed to be the originator of the class of heavy cavalry known as cataphract. During the time of Achaemenid Persia cavalry was the elite arm of service (as was the case in most civilizations), and many Persian horsemen such as the bodyguard unit of Cyrus the younger were rather heavily armored by ancient standard. By the time of Alexander's invasion cataphract units...
Read More