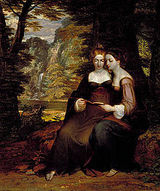 Description:
Helena is one of the iconic four young lovers in William Shakespeare's A Midsummer Night's Dream, and is a very desperate woman. She is generally interpreted as being tall, slim and blonde - her best friend Hermia calls her a "painted maypole" during an argument. Although she does not see herself as attractive, she is just as pretty as Hermia. Helena comes from a rich family in Athens and, with regards to status, is towards the higher end of the social hierarchy.

Helena and Demetrius were previously betrothed. Demetrius is known to not care about who he is with. He was first engaged to Helena, but was told to marry Hermia. He was fine with that, but Helena wasn't. She wishes to have his love again. In act I, Scene I, Lysander says "Demetrius, I'll avouch it to his head, Made love to Nedar's daughter, Helena" showing us that Demetrius is fickle.

When Helena discovers that Hermia and her lover, Lysander, have planned to elope, she informs Demetrius in the hope that this will make him love her. However, her plan backfires when Demetrius insists on following them in the hope of winning Hermia's love. Eventually, all four lovers find themselves in the Athenian forest, where the sleeping Lysander and Demetrius have a love juice sprinkled into their eyes by an errant fairy called Puck. This causes the pair to fall in love with the first person they see when they awaken; for both, this is Helena.

Demetrius and Lysander then begin to declare their love for Helena,...
Read More