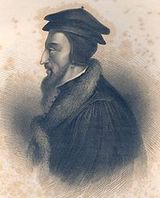 Description:
The Calvinist-Arminian debate is best known as a dispute between Dutch Protestants in the early seventeenth century. The theological points at issue as the basis of current disagreements amongst some Protestants, particularly evangelicals. These debates go back in some form to Augustine of Hippo's battle with the Pelagians in the fifth century on theological cornerstones of soteriology, including depravity, predestination, and atonement.

The Quinquarticular Controversy is a term used to refer to the purely theological Calvinist-Arminian clashes of the the period 1609 to 1618, a time in which the debate had serious political overtones in the Netherlands. This controversy is the one that was addressed by the Dutch Reformed churches at the Synod of Dort in 1618–1619, a meeting to which Protestant representatives from Reformed churches in other countries were invited. Quinquarticular (i.e. "having to do with five points") refers to points of contention raised by the Arminian party in its publication of five articles of Remonstrance in 1610. These were rejected by the Synod in the Canons of Dort, the essence of which is commonly referred to as the Five Points of Calvinism.

The Controversy marked the transformation of what was a reasonably loose Arminian movement into a separate, initially persecuted church organization in the Netherlands, and set the stage for the continuation of the predestination-free will controversy to this day in...
Read More