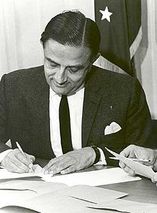 Description:
The Indian Space Research Organisation (ISRO, ) is the primary body for space research under the control of the Government of India, and one of the big six advanced space research organizations that dominate space (others being NASA (U.S), RKA (Russia), CNSA (China), ESA (Europe) and JAXA (Japan). It was established in its modern form in 1969 as a result of co-ordinated efforts initiated earlier.

Over the years, ISRO has conducted a variety of operations for both Indian and foreign clients. ISRO's satellite launch capability is mostly provided by indigenous launch vehicles and launch sites. In 2008, ISRO successfully launched its first lunar probe, Chandrayaan-1, while future plans include indigenous development of GSLV, manned space missions, further lunar exploration, and interplanetary probes. ISRO has several field installations as assets, and cooperates with the international community as a part of several bilateral and multilateral agreements.

Modern space research in India is most visibly traced to the activities of scientist S. K. Mitra who conducted a series of experiments leading to the sounding of the ionosphere by application of ground based radio methods in 1920's Calcutta. Later, Indian scientists like C.V. Raman and Meghnad Saha contributed to scientific principles applicable in space sciences. However, it was the period after 1945 which saw important developments...
Read More