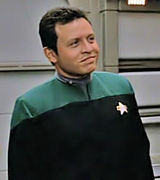 Description:
"'Investigations" is the 36th episode of Voyager, the 20th episode in the second season. It had an average fan rating of 4.4/5 on the official Star Trek website as of September 2009.

Neelix starts a ship-wide information broadcast as an attempt to raise crew morale. However, his initial reports are somewhat downbeat as he shares the news that helmsman Tom Paris (whose conduct had become increasingly erratic through several preceding episodes) is to leave the ship permanently to join a Talaxian convoy.

It emerges that someone on board Voyager has been sending information to an enemy race, the Kazon. After Seska and the Kazon abduct Tom Paris from the Talaxian ship, Neelix suggests on his broadcast that it was Paris who had betrayed them all. Captain Janeway privately reveals to Neelix that Paris' insubordination, departure and joining the Kazon was all part of an act to flush out a suspected traitor on board. The Maquis members of the crew, including Commander Chakotay, had not been told as it was suspected that the traitor was from the Maquis. She asks Neelix to use his new journalistic role to investigate.

Neelix eventually discovers that the real traitor is Michael Jonas, a Maquis engineer. Jonas locks down Engineering, injures Neelix, and attempts to draw Voyager into a trap laid by Kazon forces. Neelix recovers and attacks Jonas, who falls over a second floor railing and dies. Tom Paris returns after damaging the Kazon ship and stealing a shuttle.