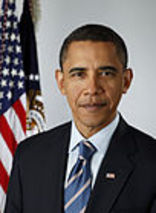 Description:
The Iowa Democratic Presidential Caucus occurred on January 3, 2008, and was the state caucuses of the Iowa Democratic Party. It was the first election for the Democrats of the 2008 presidential election. Also referred to as "the First in the Nation Caucus," it was the first election of the primary season on both the Democratic and Republican sides. Of the eight major Democratic presidential candidates, then-U.S. Senator Barack Obama of Illinois received the most votes and was ultimately declared the winner of the Iowa Democratic Caucus of 2008, making him the first African American to win the caucus. Former U.S. Senator John Edwards of North Carolina came in second place and then-U.S. Senator Hillary Rodham Clinton of New York finished third, though Clinton received more delegates than Edwards. Campaigning had begun as early as two years before the event.

History of the Caucus

The Iowa Caucuses have historically been the first held in the United States. The caucus marked the traditional and formal start of the delegate selection process for the 2008 United States presidential election, and the process in which members of the Democratic Party gathered to make policy decisions.

Iowa state law mandates that its caucus must be held at least eight days before any other meeting, caucus, or primary for the presidential nominating process. Therefore, the Iowa Caucuses have always been...
Read More