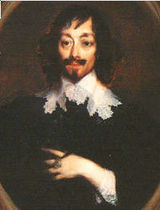 Description:
Jonkheer Jacob van Eyck (ca. 1590 – 26 March 1657) was a Dutch nobleman and musician. He was one of the best-known musicians in The Netherlands in the seventeenth century as a carillon player, expert in bell casting and tuning, organist, recorder virtuoso, and composer.

Van Eyck was born blind into a noble family in the small town of Heusden. In 1625 he left home and became carillon player of the Dom Tower of Utrecht, in 1628 he became the Director of the Carillons of Utrecht. René Descartes, Isaac Beeckman and other scientists praised his knowledge of acoustics, bell casting and tuning and bell players came to Utrecht to study with him. He died in Utrecht.

Jacob van Eyck composed the Der Fluyten Lust-hof (The Flute's Garden of Delights, or The Flute's Pleasure Garden). Editions of this work appeared in 1644, 1646, 1649, 1654, and 1656. Der Fluyten Lust-hof is a very extensive collection of about 140 melodies, each with a number of diminutions or variation, for solo soprano recorder. The themes include folk songs, dance tunes, church works, Psalms, and songs of the day. Some of the variations are considered challenging even for an experienced recorder player. Der Fluyten Lust-hof remains the largest work for a solo wind instrument in European history; it is also the only work of this magnitude to have been dictated rather than written down by the composer.