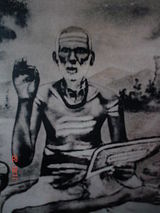 Description:
Kadapa (, ), formerly Cuddapah, is a city(municipal corporation) in the south-central part of Andhra Pradesh, India and is the headquarters of Y.S.R District). The city's name originated from the Telugu word "Gadapa" meaning threshold or gate. It was spelled "Cuddapah" but was changed to "Kadapa" on 19 August 2010 to reflect the local pronunciation of the name.

Kadapa is one of the important cities in Rayalaseema, Andhra Pradesh, and is situated in the south-central part of the Andhra Pradesh State. It is located south of state capital, Hyderabad and is situated 8&nbsp;km south of the Penna River. The city is surrounded on three sides by the Nallamala and Palakonda hills. The city is named "Threshold" because it is the gateway from west to the sacred hill Tirumala of Sri Venkateswara Swamy.