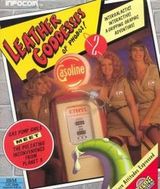 In the original Leather Goddesses of Phobos, the titular Goddesses suffered a humiliating defeat in 1936 at the hands of an Earthling from Ohio. Now it's 1958, and astronomers have recently discovered "Planet X", the tenth planet in our solar system. The desert town of Atom City, Nevada doesn't contain much besides a military base, nuclear power plant and gas station. But one night the sleepy town witnesses a spaceship that crash-lands with a single survivor: Barth, the "Pulsating Inconvenience" from the world known as Planet X.

The Leather Goddesses have invaded Planet X and forced its inhabitants to become sex slaves. Barth has fled to Earth in a desperate effort to find humans who can help free his planet. The player can play as any of three characters: Barth (the alien), Zeke (the gas station owner), or Lydia (daughter of the astronomer who "discovered" Planet X).