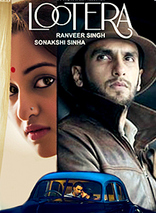 says "Lootera : A major drawback for Lootera many observers felt was the low pitch talking. Lootera had very low voice intensity among actors and one does not understand what Ranveer Singh and Sonakshi Sinha were talking is the major complaint among some viewers."

Lootera is an upcoming Bollywood period romance drama film directed by Vikramaditya Motwane. It is the second film directed by Motwane, after his critically acclaimed debut film Udaan. The film stars Ranveer Singh opposite Sonakshi Sinha. Lootera features music by Amit Trivedi and cinematography by Mahendra J. Shetty. The film is scheduled for release on July 5, 2013.
The plot outline of the film was revealed on the official social networking pages of the film.

The year is 1953. A fellow named as Varun Shrivastav comes to the village of Manikpur in West Bengal with a fake identity of archaeologist along with his team to steal the ancient idol of the temple grounds of the local Zamindar. With knowledge and experience beyond his young demeanour, Varun greatly impresses the Zamindar and his family. Especially Pakhi, the Zamindar's feisty and only daughter, who finds herself irrevocably drawn towards him. But Varun isn’t all he seems on the surface. And as the simmering attraction between him and Pakhi leads to a tender and deep love, he is forced to choose between her and his past. Day before their marriage Varun Makes his choice, Varun and his team disappear with idol. The next morning when Pakhi's father discovers that the idol was stolen, he could not bear the pain and died by heart attack. Pakhi struggles to move on with her life and determined to forget him and their relationship. She comes to the Shimla, where they have their another home until one day, when Varun and his team come to shimla for another assignment and returns to Pakhi's life under the most extraordinary circumstances. Lootera Movie Trailer | Lootera Movie Song |