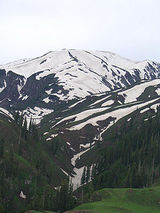 Description:
Mansehra District () is in the Khyber Pakhtunkhwa province of Pakistan, an area still unofficially known as the Northwest Frontier. Mansehra district and town are named after Man Singh, a leading general of Mughal Emperor Akbar. The Kaghan Valley area (a popular tourist destination) and the Karakoram Highway pass through the district.

Alexander the Great and Ashoka

Alexander the Great, after conquering parts of Punjab, established his rule over a large part of Mansehra District. In 327 B.C., Alexander handed this area over to Abisaras (Αβισαρης), the Raja of the Poonch state. Mansehra remained a part of Taxila during the rule of the Maurya dynasty. Ashoka the Great was the Governor of this area when he was a prince. After the death of his father, Bindusara, around 272 B.C., Ashoka inherited the throne and ruled this area as well as Gandhara. Today, the Edicts of Ashoka inscribed on three large boulders on the side of a rocky outcrop near Bareri Hill serve as evidence of his rule here. The Mansehra rocks record fourteen of Ashoka's edicts, presenting aspects of the emperor's dharma or righteous law, and represent the earliest irrefutable evidence of writing in South Asia. Dating to middle of the third century BC, they are written from right to left in the Kharosthi script.

The name Mansehra is a modified form of the name Maan Singh, who once ruled over this area.

The Tanoli territory of Amb State has also been part of Mansehra...
Read More