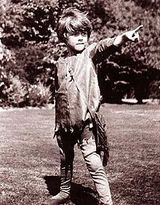 Description:
Michael Llewelyn Davies (16 June 1900 – 19 May 1921) was &ndash; along with his four brothers &ndash; the inspiration for J. M. Barrie's characters Peter Pan, the Darling brothers, and the Lost Boys. Late in life, his only surviving brother Nico described him as "the cleverest of us, the most original, the potential genius." &ndash; just short of his 21st birthday.

Davies was the fourth of five sons of Arthur and Sylvia Llewelyn Davies. He was born three years after Barrie became friends with his older brothers and mother in 1897. He and his eldest brother George were the boys closest to Barrie, and he is widely reported as the individual who most influenced the portrayal of Peter Pan in the 1911 novel based on the play. He was an infant as Barrie was writing the first appearance of Peter Pan as a newborn in The Little White Bird. He was four and a half years old when Peter Pan, or The Boy Who Wouldn't Grow Up debuted in December 1904. The following winter, he was ill for several months, so in February 1906 Barrie and producer Charles Frohman brought scenery and some of the cast to the family's home in Berkhamsted to perform the play for him. Barrie began writing a sequel to Peter Pan about the boy's brother, to be...
Read More