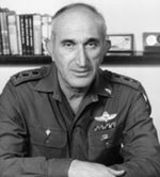 Levi, born in Tel Aviv to an Iraqi Jewish family, was known by his army nickname Moshe VaHetzi ( lit. "Moshe and a half") because of his towering height.

He was drafted into the army in 1954 and served in the Golani infantry brigade. Later he joined the paratroops. In 1956, after completing his officer's course, he took part in the Mitla Pass parachute drop.

Levi was promoted to Chief of Staff in 1983, succeeding Rafael Eitan. During his tenure, he oversaw the redeployment of Israeli troops in Lebanon and the creation of the security zone in South Lebanon.

Levi helped to found the IDF Ground Forces branch. He presided over the IDF withdrawal from Lebanon in 1985 and created two new brigades: the Nahal and Givati brigades.

After retiring from the army, Levi returned to his home on Kibbutz Beit Alfa in northern Israel. In his last years, he was a member of the supervisory board of Highway 6, also known as the Trans-Israel Highway.

Levi was married twice and had five children.