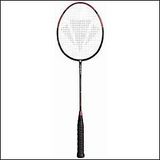 The crowning achievement of his career was winning the Men's Singles at the 1997 IBF World Championships in Glasgow, Scotland. It was the first time a Dane and a non- Asian player captured that title since Flemming Delfs won at the first-ever IBF World Championships held in Sweden in 1977. The Men's Finals in 1997 is regarded as one of the best badminton matches played ever because of both the duration and quality of the match. In the end, Peter Rasmussen's opponent, Sun Jun of China cramped up and could barely continue. Rasmussen capitalized on the opportunity and closed out his three game victory, 16-17, 18-13, 15-10.

Rasmussen has often been called Den Hvide Kineser or The White Chinaman. This is not only due to his playing style which featured speedy footwork and powerful jump-smashes (typically a hallmark of Chinese badminton players), but also because of his spiritual interests. He educated himself in acupuncture and practiced it to help overcome injures. He studied Miyamoto Musashi and believed in a philosophy of strategy, rather than one of results which he saw as predominant among elite players.

Rasmussen suffered a career ending foot injury on 25 September 2004, during the Men's Singles Final of the 2004 U.S. Open . He was forced to retire while leading the score 12-7 in the...
Read More