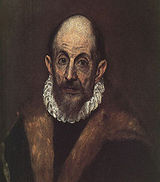 Description:
El Greco (probably a combination of the Castilian and the Italian language for "The Greek", 1541 &ndash; April 7, 1614) was a prominent painter, sculptor and architect of the Spanish Renaissance, whose dramatic and expressionistic style was met with puzzlement by his contemporaries but found appreciation in the 20th century.

El Greco was disdained by the immediate generations after his death because his work was opposed in many respects to the principles of the early baroque style which came to the fore near the beginning of the 17th century and soon supplanted the last surviving traits of the 16th century Mannerism.M. Lambraki-Plaka, El Greco-The Greek, 49 Only his son and a few unknown painters produced weak copies of his works. Late 17th and early 18th century Spanish commentators praised his skill but criticized his antinaturalistic style and his complex iconography. Some of these commentators, such as Acislo Antonio Palomino de Castro y Velasco and Ceán Bermúdez described his mature work as "contemptible", "ridiculous" and "worthy of scorn".Brown-Mann, Spanish Paintings, 43<br>* E. Foundoulaki, From El Greco to Cézanne, 100-101

The views of Palomino and...
Read More