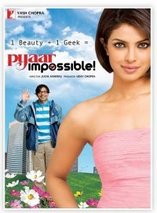 Pyaar Impossible is a forthcoming 2010 Bollywood film directed by actor-turned-director Jugal Hansraj under the banner of Yash Raj Films. This romantic comedy film features Uday Chopra, Priyanka Chopra and Dino Morea in leading roles..
Uday Chopra himself has written the script for the movie. Pyaar Impossible is scheduled for release on January 08, 2010.
The film's official website describes the film as the love story of a beauty and a geek.
No messages found
Suggested Pages