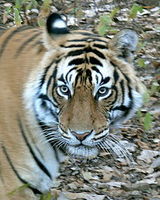 Description:
Ranthambore National Park () is one of the largest national parks in northern India. It is situated in Sawai Madhopur district of southeastern Rajasthan, about 180&nbsp;km from Jaipur, which is also the nearest airport. The nearest town and railway station is at Sawai Madhopur, about 11&nbsp;km away.

Ranthambore wildlife sanctuary is known for its tigers and is one of the best places in India to see these majestic predators in the jungle. Tigers can be easily spotted even during the day time. A good time to visit Ranthambore National Park is in November and May when the nature of the dry deciduous forests makes sightings common. Its deciduous forests were once a part of the magnificent jungles of Central India.

The park lies at the edge of a plateau, and is bounded to the north by the Banas River and to the south by the Chambal River. There are several lakes in the park. It is named for the historic Ranthambhore fortress, which lies within the national park. The park covers an area of 392&nbsp;km², and is known for its tiger population, and is one of India's Project Tiger...
Read More