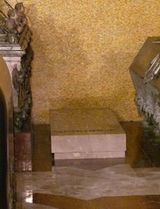 Description:
Rudolph II of Austria (1270 – May 10, 1290), the younger son of King Rudolph of Habsburg and Gertrude of Hohenburg, was Duke of Austria and Styria from 1282 until 1283, jointly with his elder brother Albert I, who succeeded him.

In December 1282 King Rudolph vested his sons with the Austrian and Styrian duchies, which he had seized for the House of Habsburg from King Ottokar II of Bohemia in 1276. However, in the Treaty of Rheinfelden on June 1, 1283 Rudolph II had to relinquish his share in favour of his brother Albert. In compensation his father King Rudolph appointed him as "Duke of Swabia" - more or less an honorific title, as the former stem duchy had been in long-term disarray after the last Hohenstaufen duke, the underage Conradin, was killed in 1268. In Swabia the former Counts of Habsburg only held various smaller home territories, later summed up as Further Austria, of which Rudolph II actually never got hold of.

In the course of the reconciliation process with the Přemyslid dynasty, Rudolph II in 1289 married Agnes of Bohemia, daughter of King Ottokar II and Kunigunda of Slavonia. They had one son John. Rudolph died suddenly at Prague, where he stayed at the court of his brother-in-law King Wenceslaus II, in the same year his son was born, at the age of 20.

His brother's failure to ensure that Rudolf would be adequately compensated for relinquishing his claime on the throne caused strife in the Habsburg dynasty, leading to the assassination of Albert I...
Read More