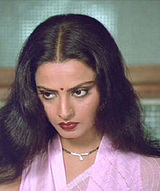 Orphaned at very young ages, Shekhar (Shashi Kapoor) and Amit Malhotra (Amitabh Bachchan) are survivors and lead independent lives with Shekhar being a Squadron Leader with the Indian Air Force, and Amit a struggling writer. While Shekhar has fallen in love with lovely Shobha (Jaya Bhaduri), Amit woos an attractive Chandni (Rekha). Both brothers plan to marry together. But fate has something much worse in store for them when Shekhar is killed in a plane crash, leaving behind a pregnant and devastated Shobha. Taking pity on Shobha's plight, Amit marries her and writes to Chandni to forget him. This news breaks Chandni's heart, and she goes on to marry Dr. V.K. Anand (Sanjeev Kumar), who is very much in love with her.

Tragedy strikes once more, and Shobha loses her child in a car accident. With no child to tie them together, Amit and Shobha drift apart. Amit happens to meet Chandni and they secretly rekindle their romance. They meet on the sly, until one day when Chandni accidentally hits a passerby. The police get involved, but Amit manages to hush the matter up. But their secret meetings will no longer be secret anymore for the police inspector in charge of this accident is none other than Shobha's cousin, Kulbhushan, and he is...
Read More