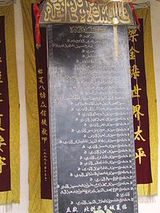 Description:
Silsila () is an Arabic word meaning chain, often used in various senses of lineage. In particular, it may be translated as " order" or "genealogy". It is derived from the notion of apostolic succession.

Centuries ago, Arabia did not have schools for formal education. Students went to masters who taught them. Upon completion of their study, they received ijazah (permission) which acted as the certification of education. A graduate then acted as a master having his own students. This chain of masters was known as Silsila. Somewhat analogous to the modern situation where degrees are only accepted from recognized universities, the certification of a master having a verifiable chain of masters was the only acceptable legitimation:

"Theoretically one can only receive instruction in these practices (talqîn) from an authorised teacher of the tariqa, and only after pledging a vow of obedience (bay'ah) to this shaikh. The shaikh gives his disciples permission (ijâza) to practice the tariqa: he may also authorise one or more of them to teach it to others, i.e. appoint them as his khalîfa. In this way a hierarchically ordered network of teachers may emerge. Each shaikh can show a chain of authorities for the tarekat he teaches, his silsila or spiritual genealogy. Usually the silsila reaches back from one's own teacher up to the Prophet, with whom all tarekats claim to have originated although there have been modifications along...
Read More