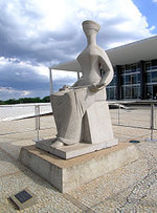 Description:
The Supreme Federal Court () is the supreme court (court of last resort) of Brazil, serving primarily as the Constitutional Court of the country. It is the highest court of law in Brazil for constitutional issues and its rulings cannot be appealed. On questions involving exclusively lower legislation, the highest court is, by rule, the Superior Court of Justice.

Alongside its appeal competence, mostly by the Extraordinary Appeal (Recurso Extraordinário), the Court has a small range of cases of original jurisdiction, including the power of judicial review, judging the constitutionality of laws passed by the National Congress, through a Direct Action of Unconstitutionality (Ação Direta de Inconstitucionalidade, or ADIn).

The judges of the court are called Ministers (Ministro), although having no similarity with the government body of minister. They are appointed by the President and approved by the Senate. There is a mandatory retirement age of 70.

All judicial and administrative meetings of the Supreme Court have been broadcast live on television since 2002. The Court is open for the public to watch the meetings.

In May 2009 The Economist called the Supreme Federal Court "the most overburdened court in the world, thanks to a plethora of rights and privileges entrenched in the country's 1988 constitution (...) till recently the tribunal's decisions did not bind lower courts. The result was a court that is overstretched to the point of mutiny. The Supreme Court received...
Read More