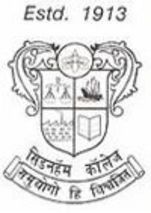 Sydenham College, "the first college of commerce in Asia," was established in October 1913. It was named after the then-governor of Bombay, Lord Sydenham of Combe, who was instrumental in making the undergraduate degree of Bachelor of Commerce possible in Mumbai. This makes Sydenham College the oldest degree-awarding institution in commerce. K.S. Aiyar acted as first honorary principal of the college. It was only in 1941, twenty-eight years after the establishment of Sydenham College, that any other institute started offering courses in the subject.

On the college's seventy-fifth anniversary in 1988, the Indian Post Office issued a commemorative stamp. In 1990, TIME rated Sydenham College as the "Best Commerce College this side of the Suez."