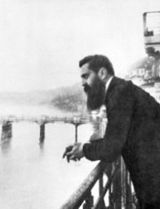 Description:
Theodor Herzl (, , , ); May 2, 1860 – July 3, 1904), born Benjamin Ze’ev Herzl (, ), also known as חוֹזֶה הַמְדִינָה, Hozeh HaMedinah, lit. "Visionary of the State" was an Austro-Hungarian journalist and the father of modern political Zionism and in effect the State of Israel.

He was born in Pest, Hungary, to an Ashkenazi Jewish family originally from Zimony (today Zemun, Serbia), which was then part of Austria-Hungary. He was second child of Jeanette and Jakob Herzl, who were German-speaking, assimilated Jews. A precocious, moody daydreamer, he aspired to follow the footsteps of Ferdinand de Lesseps, builder of the Suez Canal. He did not succeed in the sciences, and he developed a growing enthusiasm for poetry and the humanities. This passion would later develop into a successful career in journalism and a less celebrated pursuit of play-writing.Elon, Amos (1975). Herzl, p.21-22, New York: Holt, Rinehart and Winston. ISBN 978-0-03-013126-4.

Herzl had minimal interest in religious Judaism as a child, consistent with his parents’ lax adherence to the Jewish tradition. His mother relied more on German humanist Kultur than Jewish ethics. Instead of a Bar Mitzvah, Herzl's thirteenth birthday was advertised a "confirmation". To be sure, he grew up as a "thoroughly emancipated, antitraditional, secular, would-be German boy" who dismissed all religion, and spoke of Judaism with "mocking...
Read More