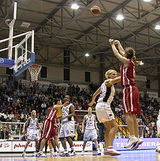 Description:
A three-point field goal (also known as three-pointer) is a field goal in a basketball game, made from beyond the three-point line, a designated arc radiating from the basket. A successful attempt is worth three points, in contrast to the two points awarded for shots made inside the three point line.

A three-point field goal is distinguished from a "three-point play" or an and-1, which occurs when a shooter successfully scores a two-point basket while being fouled, and then makes the ensuing free throw. If such a foul occurs on a successful three-point shot, the resulting free throw gives the player a chance to earn a four-point play.

A three-point rule was tested in 1933 at the suggestion of Herman Sayger of Tiffin, Ohio. Sayger demonstrated new rules designed to eliminate the center jump and establish a new scoring system in a game played by high school athletes in Tiffin, Ohio.

The three-point rule was first tested at the collegiate level in a 1945 National Collegiate Athletic Association game between Columbia and Fordham. However, professional basketball was the first to adopt the rule on a permanent basis. The short-lived American Basketball League did so in 1961, and the Eastern Professional Basketball League followed in its 1963–64 season. The three-point shot later became...
Read More