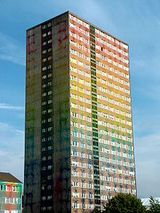 Description:
Toryglen is a small district in southern Glasgow, Scotland. It is approximately 2 miles south of the city centre to the west of Rutherglen. It is bounded to the west by Mount Florida, the north by Oatlands and the south by King's Park.The name 'Torryglen' first appeared on maps in the late 18th century and was a small farmhouse in the north of the present day area.

Toryglen is a residential area built mainly south of Prospecthill Road between 1947 and 1959 by the Scottish Special Housing Association. However, the north of the district was constructed by the city authorities between 1963 and 1968. Prospecthill Circus was a colourful collection of two 23 storey tower blocks (one since demolished), a 20 storey slab block and numerous deck access maisonettes. 'The Circus' is undergoing comprehensive redevelopment by the G.H.A. (Glasgow Housing Association). There is very little left of the old 'Circus' and the area is virtually unrecognisable from the way it was 10 years ago. Toryglen is also home to some of the city's early experiments in multi-storey housing built around 1955. The population is approximately 7,000.The Toryglen pitches (on the south side of Prospecthill Road) are currently being re-built into a sports centre, as part of Glasgow City Council's plans to boost the city's sporting facilities in the run up to hosting the Commonwealth Games 2014.

A derelict multi-storey block awaiting demolition in Prospecthill Circus was used in 2006 by SONY to create an advertisement...
Read More