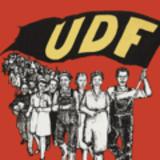 Description:
The United Democratic Front (UDF) was one of the most important anti-apartheid organisations of the 1980s. The non-racial coalition of about 400 civic, church, students', workers' and other organisations (national, regional and local) was formed in 1983, initially to fight the just-introduced idea of the Tricameral Parliament (the parliament was put in place in 1984 with the election of P. W. Botha of the National Party. Its slogan, "UDF Unites, Apartheid Divides" reflects the Front's broad support (about 3 million members).

The plans for a new political organisation were introduced by Rev. Alan Boesak at a conference of the Transvaal Anti-SAIC Committee (TASC) on January 23, 1983. The part of his speech calling for a "united front" of "churches, civic associations, trade unions, student organizations, and sports bodies" was unplanned, but well-received. Trade unions were very important in the UDF. They began to emerge in the 1980s and took on the roll of the "muscle" of the UDF. UDF pursued a strategy known as "ungovernability": leadership of these organizations declared a strategy to make lands ungovernable. The TASC appointed a sub-committee to investigate the possibility of such a front. After much debate, it was decided that the new organization would be a coalition of non-racism anti-apartheid organizations.

The launch of the UDF

The UDF then formed regional committees, which established relationships with...
Read More