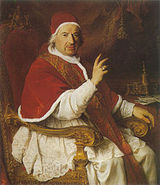 Description:
Vix Pervenit: On Usury and Other Dishonest Profit was an encyclical, promulgated by Pope Benedict XIV on November 1, 1745, which condemned the practice of charging interest on loans as usury. Because the encyclical was addressed to the Bishops of Italy, it is generally not considered ex cathedra.Turner, Bryan Stanley. 1999. Max Weber: Critical Responses. Routledge (UK). ISBN 0415184738. p. 143. The Holy Office applied the encyclical to the whole of the Roman Catholic Church on July 29, 1836, during the reign of Pope Gregory XVI.

The encyclical codified Church teachings which date back to early ecumenical councils, at a time when scholastic philosophy (which did not regard money as a productive input) was increasingly coming into conflict with capitalism. Though never formally retracted, the encyclical's relevance has faded as the Roman Catholic Church retreated from actively enforcing its social teachings in the financial sphere, and as the practice of charging interest on loans became almost universally accepted&mdash;legally and ethically.